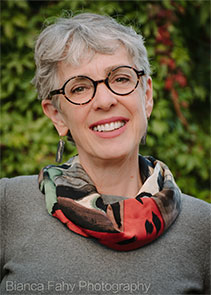 (the contest runner-up and honorable mentions are listed here)

Kelly Rowe received my MFA in English from the University of Iowa. Her chapbook Flying South on the Back of a Dove was published by the Texas Review Press in January, 2019. Her second chapbook, Child Bed Fever, was selected for the 2021 Rane Arroyo Series and is forthcoming from Seven Kitchens Press. Her poems have appeared or will appear in North American Review, New Ohio Review, 32 Poems, Massachusetts Review, Salamander, and New Letters. She lives in Flagstaff Arizona and works as a volunteer attorney representing undocumented women.

Sample poems from Kelly Rowe's Rise above the River

It’s like walking into a stranger’s house,
and there is the painting that used to hang
in your parents’ living room:
A snowy landscape
crowded with figures hurrying home
under a lowering sky.

In one corner, a lake and a tiny wood,
a red brushstroke that could be a bird,
or a girl’s dress hung on a branch;
it could be the roof of a summer house
you visited once, when it was drowning
in blackberries, heavy and sweet.

Now the sun hunches off to the side
in a gray overcoat.  And the red blur?
Leaning close, you see it has moved—
now it is the cap of a man out fishing,
alone on the ice. Halfway to shore a crack
opens, unnoticed; a spill of water seeps.

Impossible to know for certain
what the artist meant,
or to reach the man in time,
as he sits surrounded by the growing dark
circle of water, beyond the bare black trees,
the path obscured by snow.

Coin in hand, he stepped between the rails of the empty track, the southbound train still rolling along the far track. Nobody saw—or heard—the other, northbound train.
[date and newspaper identification removed for purposes of judging]

It was dark that night on the Florida rail,
the engineer squinted in terror,
as a body bent over the outbound rail,
laying pennies there.

“Stay put, stay put,” the engineer cried,
but the figure stood up and stepped back,
into the locomotive cry,
into a sudden black.

A shadow rose up from the track that night,
limped into the woods and hid.
A ghost? A fox? A piece of the night,
with a metal plate in its head.

A hunter came and went in the wood,
mostly at dusk and dawn,
at first he came to the wood alone,
but then he brought his dogs.

One morning he let the hounds off their lead,
and put them to the scent,
the wild thing ran to earth
nearly spent.

The hunter pushed through the bushes,
to follow the baying dogs,
kicking away the brush,
dislodged a log.
The hounds dug in to the hole,
the hunter cocked his gun
they dragged him out of his hole,
a day’s work done.

It was you led him down to the tracks that night,
it was you who gave him the pennies,
“Let’s have some fun in the dark tonight,
Come to me now, little honey.”

Something shone in the moonlight,
a row of copper coins,
the track of a zipper catching the light,
opening the dark.

Oh, a debt to the devil, you must pay,
so I’ll drag you down to the pit,
I’ll wrap your long yellow curls
round and round my fist.

I’ll shove you down the gravel slope,
I’ll guide you with a hiss,
now look! A boy bends over the rail
to place something like a kiss.

Postmarked from the dead
middle of Mississippi,
the message on the back read—
Happy birthday—ahoy!
On the front a big breasted blonde
leaned on a long curved sword,
arched her back, hand cocking
a pirate hat; rosy cherries
peeked through her baby-doll gown,
pouty lips, a wink, full grown.

That was the summer my daughter
and her Dad built the treehouse
with the leafy view of heaven,
the year she turned eleven
and you were forty-two, the summer
I stopped speaking to you,
and years before I could remember
how your face was lovely once,
like hers, how your soul,
that stump filled with nails,

once lifted a canopy, abundant,
green, like the ones I see at the refuge
in spring, towering over the marsh,
blossoming with the restless
white wings of nesting storks.

I paddled out
with your boyhood friend
into the chop and punch of
the Mississippi and watched
while he tipped the plastic box
of you into the black.
Before you sank
the wind scooped you up
in her thick arms
as if you were a little
white cat, set you
in her lap where you
curled up and she
petted you a while.
We put up tents
on your island that night,
but never slept. Instead
we listened to the wind—
old soul, old soul,
how she crooned,
how she moaned
how she wept.

I know who she is talking about and I wept with her. He was my friend. I may even remember the painting.