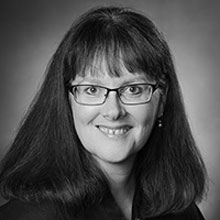 Deirdre O'Connor's first book, Before the Blue Hour, received the Cleveland State Poetry Prize and was published in 2002. Her work has appeared in Poetry, Cave Wall, Crazyhorse, Cordella, and other journals. She direct the Writing Center at Bucknell University, where she also serves as Associate Director of the Bucknell Seminar for Undergraduate Poets.

But now I am tired as oceans, and seeing
what oceans see: gray mirror skies and clouds
both empty and full, if clouds, like mothers, might be said
to contain. I am lace-edged, variable, cool; sluiced
through, plummeted, swum; closing and open.
You play on the beach of me and would bury
yourself, if you could. Your shovel and green pail
float; the shells you’ve gathered sink. I would carry them
on my tongue if I need not speak. Your father in you
is a banned continent, a map without land. Never
a bridge, never a means to an end, merely the end—
its language, color, line. To erase the place (the idea,
the representation) we may not go (I must include you)

Like rain to ice, the ancestral. All becoming,
contracted to archive. How much easier it was
to die then, to lie down and not wake up, lungs filled
to collapse, bedside tea gone cold, and the oldest
daughter finding the body warm and harried-looking
still, a ruddy mask, hands already waxen
that had an hour earlier filled a pot
with water. What is the word for not having been
in the room, for missing the turn? Should there not be
softening in every window? Snow, an oak
for the unfastening? Every girl in braids,
her chin uplifted, understudies an earlier girl.
How to convene the territories, invite the future
forward with the same indelible dark hair?

His slit wrists wrapped like little mummies,
I sat on the edge of the bed and held his hand
and made myself kiss his hair like a mother
then kissed his eyebrows and nose.
Until that afternoon I'd been my mother
when she was young, expecting a man
to draw me out of darkness, a fish
to whom a crumb is tossed.

Imagine from underneath the shining surface
of the pond, the silver brilliance
nearing. Swimming up and up.
You know it, too, the cold-to-warm,
the hollow knocking sound of oars,
the smooth blue-bottomed boat
that grows so huge you lose the sky.
Then the shred of bread, the unseen
hand that dropped it, all too human.

To wish you happy birthday, a note. I hope
this May finds you buff and vexatiously graying
beneath Denali, where I picture you in a taupe
living room scattered with Indian pillows and fraying
rugs, dark blues and reds, like veins and blood
all these years unspilled. Since when did our shared grief
split like fixable conjoined twins and hood-
wink memory of the one life worth leaving?
I remember cutting your hair on the porch, the just-
washed scent of your hair and aftershaved jaw, the smoke
of a football cookout nearby, and the acrid dust
of something not meant to burn registered. I woke
to my own awakeness, perhaps, there in the plain
act of cutting something that couldn’t hurt, beautiful hair.

A Man and a Name

A man screws a woman, then is smitten
by another with her name.

He is like the sky's coincidence,
never the same cumulonimbi,

but always the sky. He is in the look
of the gift horse, the whites of the horse's eyes.

Together, the man and the woman
inhabit a certain reddish gray

apart, they live
the finest
distinctions,

the first-name basis of difference,
which hates what it might love.

A name is a tool, after all,
a strategy, not a hat rack,

though both have cursive elements,
branches and hooks.

Even a name, like desire, can be owned
not at all. Braid against better wishes.

The self is winter's luxury for the alone.

A great poetry has a door that many can enter, a handle to use, but once inside the rooms become mysterious,
their meanings disappear through the walls. That's how I would describe the excellence of the poems above.